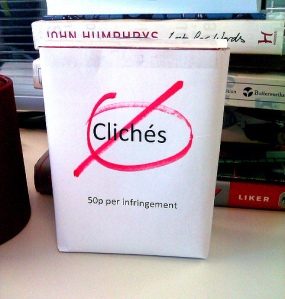 Cut clichés. That’s an early lesson we writers learn, and for good reason. Clichéd phrases cheapen our writing. They may be helpful in everyday speech, so instantly recognizable that they’re like the traffic signs of language. But it’s precisely because they’re so glaring that they are toxic to the written word: they are trite, overused, unoriginal. If watching out for clichés is on your revision checklist, it’s easy enough to spot them:

Just to name a few. (If they’re not on your revision checklist, now might be a good time to add that. ) I don’t want to give the impression that you should never, under any circumstances, include a cliché in your writing. They do have a place when used intentionally. If you’re trying to achieve a certain tone or voice in a piece, cliché’s can help you do that. Used in character dialogue, clichés can give readers a strong sense of personality or setting. But reading a story riddled with unintentional clichés can quickly start to feel cheap and unsatisfying.

But clichéd phrases aren’t the only kinds of cliché that can sneak into our writing. What about stereotypes, overused tropes, and outworn genre conventions? Have you read a book’s back cover and promptly reshelved it, thinking, “Oh, I’ve read that before”? It’s this type of cliché that I want to focus on because it’s so easy to find them slipping into our stories. I wrote a short story not long ago, revised it a few times, and still found myself frustrated by how blasé it felt. So, trying to get a fresh perspective, I submitted it to my writing group for critique. They pointed out that one of my main characters was a pretty blatant stereotype, and they were right! He was right there under my nose It was obvious, but I couldn’t see it.

So, when we do find these in our writing, what can we do about them? One technique I’ve found incredibly helpful is to employ nuance. Stereotypes, like clichéd phrases, exist for a reason—because they’re almost accurate, they reflect a type of person or experience in the real world. But the inaccuracy of a stereotype lies in its rejection of nuance. So, yes there are ditzy cheerleaders and dumb jocks and nerdy gamers and soccer moms and workaholics . . . but what if you don’t have to chuck them out completely? What if they’re variations on a theme? Maybe your ditzy cheerleader was raised by a single dad and can change her own oil and fix a flat tire without calling her boyfriend. Maybe your nerdy gamer comes from a long line of famous chefs, so he can make a flawless six course French meal. Can you see the possibilities? Add an extra trait, another dimension, and you can see new avenues opening up or old ones rewriting themselves. To get to that place, though, of thinking differently about your characters and storylines, teasing out the possibilities is often the next step. One way is to ask yourself questions to get the ideas flowing. See if any of the following questions help you think a little more deeply about stereotypical characters or overused plot lines:

If you’ve done this revision work already and had no success, then maybe it’s just time to start over. Sometimes that’s the best thing, but it’s worth the creative exercise to try fiddling with it first.

This is the hard work of writing and revising, right? It’s easy to be attached to our characters and storylines as they are and just ignore that nagging feeling when they’re too easy or too obvious or whatever it is that’s making them cliché. But that doesn’t serve our efforts to be strong writers or to thrill and enlighten our readers. There’s a phrase in yoga that I think is useful to the writing craft too: “Play your edge.” In any given yoga pose, that means you come to the absolute edge of what you can do in that moment, and then you hold the pose, grow in that space, rise to a new level of strength and flexibility.

How can you play to your edge in your work-in-progress or in a self-identified weakness in your craft? What other techniques have you used to work through clichéd prose or story problems?